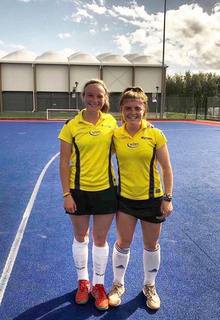 Congratulations to Amelie Green and Diana (Di) Bevan on their selection to the English Universities Hockey Squad for a series of games against Welsh and Scottish Universities, an Armed Forces tournament, a game against the England O35s squad and the pinnacle event of the season against the England U21’s, who are coincidentally coached by their Team Bath Buccaneers Ladies 1st team coach, Jody Paul. A lot on the line in this game in March!

This is a fantastic achievement for both, being Di Bevan’s first season in the squad and a tremendous third consecutive and final year in the squad for Amelie Green.

Team Bath Buccaneers wish the two ladies the best of luck getting invaluable international experience and hope to hear of positives results and performances that will undoubtedly aid their hockey development.