The Mens Summer 1st Team had a good season finishing second in the league. There were notable performances from a lot of our young players including Tom Young and Jack Webb who both performed very well considering their age and look good for the future. Nat O’Dwyer was solid stepping up to midfield plus George Nicholls and Will Prentice both looked sharp alongside the elder members of the team. The top scorer was shared between Rich Bendry and Ben Edge, Bendry scoring most of his from within a two yard radius.

The Sabres (Summer B) had a good season finishing in 4th 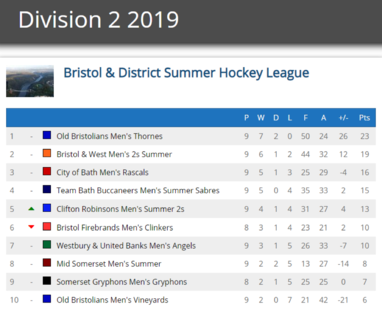 We had a great start winning 4 games and then the results went against us.

The player of the season was Alistair Mile-Ogden – he played really well in goal and kept us in a number of games with some outstanding saves.

Top goal scorer was Jamie Parish (on the left) although closely followed by Irish International, John Jackson who scored 6 in one game against Old Bristolians

The Summer A team have had mixed fortunes this season. We struggled for numbers as a result of which we played with a different team each week.  Each match was slow to get started however the team consistently played a much better second half, once the team had started to gel.

As the games went on, we started to link really nicely through the pitch, often eliminating the opposition by working in triangles to quickly move the ball up the pitch. We worked well around the circle, often winning short corners or getting a shot on target but sometimes weren’t quite in the right place to make the most of the rebounds.

Defensively, we were sometimes caught off-guard and quite high up the pitch so lost our players, resulting in some goals against us or forcing goalkeeper Izzie to make some great saves. Having said that, as the weeks went on, we became more disciplined at the back and often made it very difficult for the opposition to attack by tightly marking.

Overall, while there were undoubtedly elements that we could work on throughout the summer season, we improved massively from the start to the finish and looked threatening when we were at our best. It was a really enjoyable summer season and it was great to see so many younger players step up to their first ladies’ hockey experience so well!

Another fantastic Summer spent playing Sunshine Hockey in Chippenham for the Ladies Summer B’s. A big thank you to all of you who played and especially to our umpires, in particular juniors Jack and Bella who both had a go at umpiring this Summer.

We ended the season in third place, could have been higher, but unfortunately we were all on holiday for the last match!! We had some awesome performances with the highlight being a convincing 3 – 0 win against the ultimate Summer League winners Cirencester.

Another fantastic summer season, thank you ladies for the fab hockey and the quality gossip and chat. My dodgy hockey tan lines are now fading as I dig out my skins ready for the Winter season.

I entered a team into the England Summer Championships for Ladies Over 30s.

Our first fixture was away against Poole… with not much of a warm up and having not played together as a team before, it was a slightly nervous start. We quickly got into our rhythm though, playing some creative hockey on a very sandy pitch (we were near the beach after all) and comfortably won the game 5-0. After a bye in the next round, we then faced Falmouth at home. They were a much more challenging opposition and we found them difficult to keep at bay. The game ended at 2-2 which took us to penalty strokes. After a mix of some excellent flicks and super saves, it went down to the wire and we narrowly lost 3-2. Although a shame to go out of the competition so early, we all had a lot of fun and had a great team ethos! 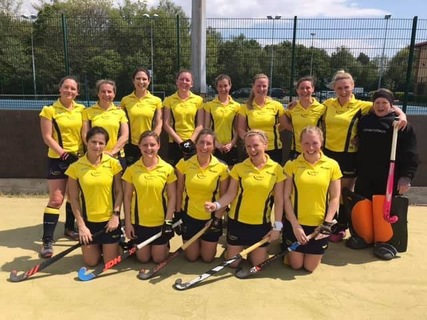