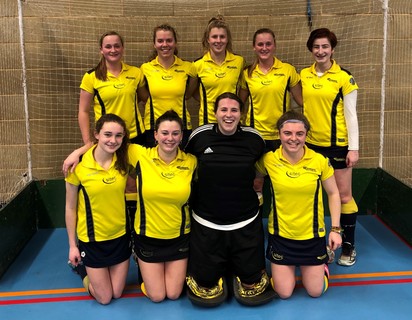 THE BOLD AND THE BEAUTIFUL SHOW TENACITY AND FLAIR DURING A WEEKEND OF SUPER 6 ACTION.

On the 5th and 6th January the Ladies Indoor team travelled to Wolverhampton to compete in the Division 2 North Round Robin after wining the South West Regional Finals before Christmas.

The ladies were outstanding all weekend with their efforts and can be proud of their achievement of wining two and losing three matches to the eventual qualifiers. More to the point although they lost these matches, we were competitive in all.

On Saturday we played a well organised Brooklands Poynton team who played good indoor hockey. In the first Half we matched them and went into half time in front 2-1 up. We did well to keep our shape in the first half, preventing the opposition opportunities to score. Unfortunately, this was not the story of the second half. We lost our shape and we were on the receiving end of several of, what I would call interesting umpiring decisions. The least said about that the better!!!

In our second match against Leeds we fancied our chances having watched them play earlier in the day. The ladies did not disappoint with a well fought win coming out winners by 5 goals to 2. With Olivia Hamilton scoring a hat-trick.

Second up after Lunch was Cannock who had struggled all weekend and we put them to the sword running out winners 6-2 with a hat-trick from Sophie Hamilton.

The last game of the competition was against a very strong Repton side who boasted some very accomplished players including a former England International player. At this stage there was some very tired legs. What really impressed me about this small group of players is that they saved their best half of hockey for this match which showed great tenacity and believe. It brought the moment of the weekend; we were having a half time chat – no coaching going on, but were sitting with a two-goal lead at 5-3 and that was with a disallowed goal as well!! In fact, the ladies played an excellent second half and at the 30th minute were still winning 6-5. In the last quarter of the match Repton score three unanswered goals which secured them victory. We did create chances in the last quarter, but we made a couple of mistakes that proved to be costly.

Overall the games we lost we were competitive in and with a larger roster we would have not been so tired in the last quarter of matches. I do believe we have the players to progress to the next stage of the competition. It is a real shame that the ladies who commited to the indoor experience did not get more support from other members. If they had, we would be able to cut the mustard at this level and maybe beyond. That may be the challenge for the coming years.

Finally, a big thank you to all the players who were involved in both competitions and for giving their best on the court. I special mention to Amelie Green who did all the organisation and was the drive behind giving players this opportunity. A thank you also to Ian Cordwell who gave his time to coach the ladies. It has been a great experience and hopefully the players can take their indoor skills into their play on the outfield pitch as leagues resume later in the month.