Team Bath Buccaneers Under 18 Girls travelled to Cheltenham on Sunday to represent the club in the Under 18 Girls Indoor Hockey West Regional Finals. Having come runners up in this competition last year we were hoping to go one better and win.

There were only three teams in the competition. All three teams had some quality players, all with indoor experience. Thus, although the teams only played two matches the quality of play was high and there was some excellent hockey during the afternoon.

The competition started with ISCA the current holders of the trophy playing against Clifton Robinsons. The match ended in a draw 2-2.

In the next match we lined up against ISCA and in the first half took our time to find our feet. There were opportunities at both ends with ISCA converting 2 and we just could not finish off some of ours. At half time 2-0 down we felt that the game was still winnable, but we need to score early and quickly in the second half. This we did with two smartly converted corners and at 2-2 we were playing all the hockey. Our play went from strength to strength and we continued to score goals throughout the half with us being 5-2 up with three minutes to play. ISCA rallied and score two late goals but it was too little to late and we came out winners 5-4.

Clifton Robinsons was our next challenge and the girls did not disappoint. We got off to a great start and were 3-0 up very quickly and took control of the game. We worked hard to nullify their threat and kept our defensive shape well. All the girls played their part and it was great to see several goals which were out of the top drawer. There were two especially that saw two players passing the ball early and accurately with the final pass taking out the keeper. Those goals that are scored across the keeper are so satisfying. Clifton Robinsons came back to score two goals, but we were always capable of scoring more and did so finishing the game with a final score of 6-2.

The girls were great throughout the whole hour of hockey they played. They worked hard for each other and really, if truth be known, gave an education to the other two teams on how to play indoor. They did everything right. They kept their shape in defence, made the right decisions and kept the ball when they needed to and were ruthless at times in attack.

With two good wins it was great to see them receive the trophy and it was thoroughly well deserved. We can now look forward to the National Finals on the 19th and 20th January. 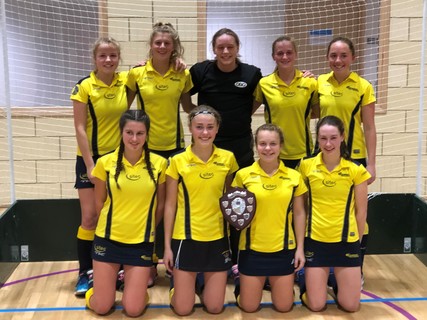