U16 Boys take Bronze at Nationals

The TBB U16 Boys season has ended with a well deserved Bronze Medal at Nationals. 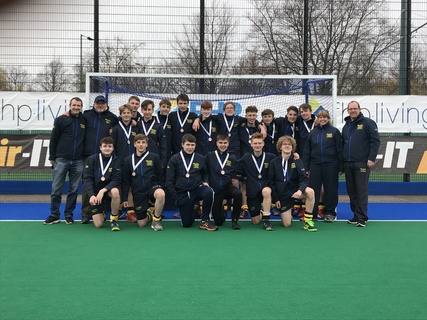 They travelled to Nottingham Hockey Centre for the finals weekend on the 7th & 8th April – drawn in a tough pool with Norwich HC, Bowden HC and Surbiton HC.

The first match on Saturday morning was against Norwich and the boys took to the pitch with great determination which saw them play well structured hockey.  William Prentice opened the boys goal tally in the first 5 minutes of the game, Buccs were then dominant over Norwich for the rest of the half not allowing them much ball time but the Norwich goal keeper kept the score to 1-0.  The second half started where the first left off with Buccs dominant and moving the ball around the pitch from the backs and midfield which created a chance for John Holdoway to score the second goal in the 33rd minute.  The third goal from Nick Hammerschmid was again a great demonstration of team work in the 45th minute with a successive goal from Will Prentice in the 46th minute giving the boys a good solid 4-0 win.  A lot to be taken from this game.

Saturday afternoon the boys faced a strong Bowden team who drew against Surbiton in their first match so Buccs knew this would be a tough battle.    From the start and for the duration of the game the pace was relentless with both sides creating chances to score but Peter Holdway on form in goal, with the help of some great tackles from defence, kept the score to 0-0 at the halftime time whistle.   The second half and both teams were determined to score but it was Bowden who scored first from a penalty corner in the 37th minute.  Buccs reacted quickly to this and equalised in the 42nd minute with Angus McDermid finding the back of the net from a deflection off the keeper.  With continued chances but no goals forthcoming the boys had to be content with a 1-1 draw.

Sunday morning and after team talks and analysis with the coaches the night before Buccs faced Surbiton.  This was an all to play for match which the boys needed to win to secure a place in the final.  Once again the pace of the match from the start was fierce with Surbiton dominating the ball in midfield and a goal coming in the 12th minute to put them ahead.  Buccs then faced what seemed like a barrage of penalty corners but with Bucc’s fearless defence none were converted before halftime.  The second half seemed to take on the same pattern as the first which gave Buccs very few chances to penetrate Surbiton’s D to have a shot on goal despite the hard work of the midfield and forwards.  Once again Buccs seemed to face another round of short corners and once again the defence did not concede one.  This left the final score at 0-1 and Surbiton through to the semis and Buccs in the play offs for 3rd/4th place.

The final match against Old Loughtonians and a chance of a bronze medal.  Once again William Prentice opened the scoring in  the 5th minute, the boys then found themselves defending for a short period of time with Nathan Coltart saving some crucial goals.    Buccs upped their game and continued to move the ball around the pitch well and just before the half time whistle William Prentice scored his second goal of the match.  Buccs looked like the stronger team at the beginning of the second half and managed to work another goal from Henry Foster in the 32nd minute.  Despite the midfield and forwards working the ball up to Old Loughtonians D no more goals came. The opposition scored off a penalty corner in the 49th minute and decided to throw everything at the game and took of their keeper and replaced with a kicking back to create an extra outfield player and they were rewarded with a goal to bring them just one behind Buccs in the dying minutes of the game.  Buccs regrouped, took control and secured the  3-2 win to take Bronze.

This team have had a very successful year with 12 wins, 1 draw, 2 losses, massing 58 goals and only conceding 15 throughout the whole season.  And of course now are 3rd in the Country.

Thanks to the coaches Ian Cordwell, Rob Prentice and Andrew Silks who have guided this team to reach their potential.

Thanks also to the club who have supported the boys throughout their journey and to Verde Recreo for their sponsorship for the Nationals.  And finally to the parental support which has been second to none to get the boys to where they have needed to be all season.