Team Bath Buccs U16 Boys progressed into the National Finals after an emphatic and professional performance in the regional finals held at Bournemouth Hockey Centre on Sunday.

A challenging game v Winchester HC started with a great team goal from John Holdoway who slotted home from close range.  Buccs dominated possession but failed to score. From Winchesters only attack of the first half a harmless cross was deflected home with the Buccs defence at sixes and sevens. The second half was a tense affair with both teams creating opportunities but a rasping short corner from David Aspray, which broke through the netting!!, was enough to give the U16’s a winning start to their campaign with a 2-1 win.

Buccs second game was a fine 7-0 win over Taunton Vale with a clam and professional performance which Henry Foster and Will Prentice grabbing a second half brace of goals between them.

The final game was against host side Bournemouth who were also unbeaten and a winner takes all game. Both sides started confidently but after a couple of half chances Buccs broke away with John Holdoway skilfully beating his defender only to be harshly tackled and a short corner awarded with the defender temporarily suspended. From the short corner David Aspray fired the ball home past the diving keeper. Buccs continued to dominate but as time passed Bournemouth came into the game through Nick Nurse and Peter Holdoway in the Buccs goal was required to make some very timely saves.

The second half was dominated by Buccs and despite a missed penalty flick Buccs wrapped the game up with a late goal from Will Prentice who hammered the ball home from close range and secure Buccs safe passage into the finals to be held in Nottingham in April. 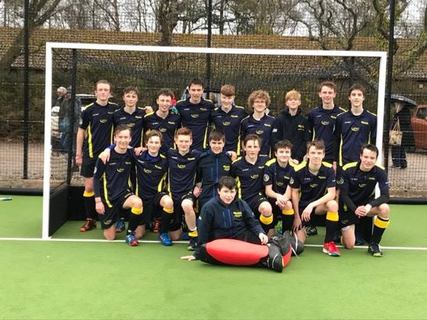