‘The U18 girls marched past the Trojans today ‘ 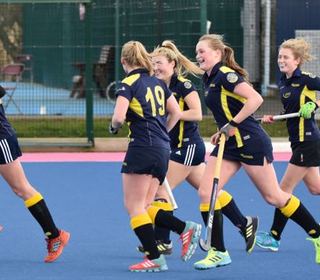 Another away match for the girls in this cup run did not phase them. Gathering after a week on half term, the match was not quite played at the pace of our last outing. This said, there were moments when the side produced some excellent hockey, pulling the opposition all over the pitch.

The deadlock was broken after ten minutes, with a well-executed penalty corner and the team settled into a well patterned and structured game. The next goal came not long after, some excellent build up play through the mid-field leading to a well worked D entry and a clinical finish.

For the remainder of the first half, Team Bath Buccs pressed for more goals and after many D entries finished a scramble in front of goal with a tap in, to make the score 3-0 at half time.

After words of wisdom from Mr Eriksson at the break, the girls played some attractive hockey at the start of the second half. They worked a well taken goal which started down the right and was finished clinically with a simple pass across the keeper and a tap in. I love those team goals.

The matched continued in the same vein with good play leading to two more goals and a well-deserved win.

The march continues on Sunday 11th March – hopefully at home!!