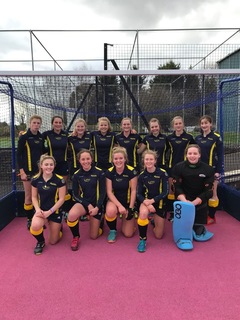 The game started with some excellent hockey. Good elimination skills, combined with some early passing, released both the mid-field and the forwards, which resulted in a barrage of D entries leading to a quickfire hat-trick from Anna von Keller. Bath Buccs were 3-0 up after 5 minutes of the match. Taunton Vale tried to gather themselves and launched some attacks, but our defence held strong with Molly Hunter and Olivia Hamilton proving to be too good in the tackle and Katie Jones and Rafi Borries-Gruber doing some excellent marking and distribution work. Katie Mallet, in goal, was called into action once in the first half but spent the rest of the match as a spectator.

The match was pretty one sided but only because the Team Bath Buccs side moved the ball quickly and effectively at the right time, into the right areas of the pitch. The front three of Imogen Hurst, Cully McDermid and Anna von Keller worked tirelessly, creating time and space for others. As a result, we scored four more goals in the first half, with strikes from Francesca Small, Sophie Hamilton (two) and Olivia Hamilton. At half time the game was effectively won.

In the second half, Team Bath Buccs continued to dominate with Lizzie White, Millie Walters and Emily Wastell dictating things in mid-field. Once again, we created many chances and it must be said that the Taunton Vale keeper was outstanding in the second half, making about seven outstanding saves. A well taken goal from Sophie Hamilton completed her hat-trick. The final nail in the coffin for Taunton Vale was the award of a penalty flick for a stop on the line with a foot. Olivia Hamilton stepped up and converted.

Overall, a complete team performance which was outstanding against a good Taunton Vale team.