‘U16 Boys – A great weekend at National Finals ‘ 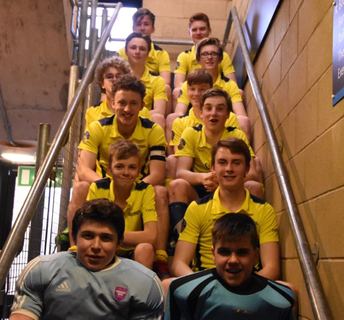 Our first game against Surbiton was always going to be a tough one.   However, the boys started well despite Surbiton being strong and getting a very early goal, we equalised but then they scored 2 very quick goals just before halftime.  Trailing by 3 goals TBB scored 2 goals to bring them back into the game but then they lost their shape a bit and allowed Surbiton to score 2 more.  Final score 3-6.  There was a lot to take away from this match.

The second game was against Old Loughtonians.  We started off strong in this game scoring early on but again lost our way allowing OLs to score 3 goals before halftime.  The boys came out quickly again in the second half and scored narrowing the game again but could not get any more goals in the back of the net to secure a draw or a win.  Final score 2-4.

Day 2 the boys were determined to put some goals in the net today and it was all to play for still in the pool.  First match was against Bowdon we scored early in the first half and played a great first half not allowing Bowdon to equalise.  The second half we held the lead for 6 minutes but then Bowdon managed to score 3 goals in succession.  Final score 1-3

Our final game of the tournament against Leicester Men and TBB meant business they got an early goal in the first half and then they just kept on coming.  Great team work, keeping their structure, moving around secured us 5-1 up at halftime.  No complacency in the second half again another early goal and then 4 more saw them end a great weekend on a high.  It was a superb game to watch and even the coach managed to stay pacing behind the bench!  Final score 10-1.

Both our Goalkeepers had storming games keeping the score lines down.  Will P is top goal scorer of the tournament and the U16 boys 4 highest goal scoring team of the tournament.  The boys should be proud of their achievements.  In the top 8 in the country.

Thanks to players, parents, coaches especially John Jackson who travelled up on Saturday evening to coach the boys on Sunday.  It has been a fun weekend with great hockey an experience I think we need to revisit next year!

Photos from the tournament can be found on the link below: