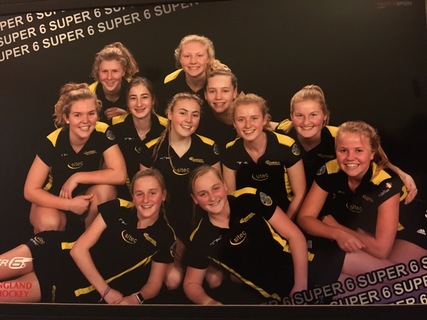 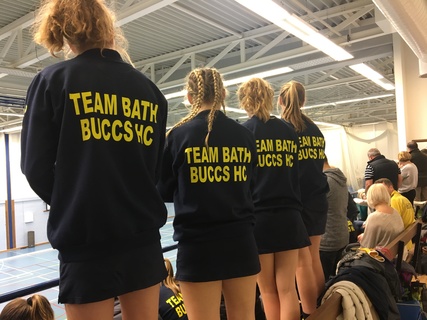 Team Bath Buccaneers U18 Girls Indoor Team push the eventual National Champions all the way in a thrilling Semi-Final, only to lose on penalty flicks.

At the start of the weekend this sort of headline seemed a bit of a pipe dream! Drawn in a pool with Beeston, East Grinstead, Harleston Magpies and City of York it looked like it was going to be a tall order to get out of our Pool. Nevertheless we felt confident that we could be competitive. Our first match against Harleston Magpies started well with an early goal in the first minute from Sophie Hamilton. The Magpies equalised from a penalty corner. At half time the match was in the balance. Team Bath Buccs started the second half well with two goals from Anna von Keller. At 3-1 Team Bath Buccs had a semblance of control. The Magpies came back at us and scored in the twenty third minute to make the score 3-2. At this point they took off their keeper and Sophie Hamilton took advantage of an early ball from her sister Olivia to score into an empty goal. That secured the win. What a start in the National Finals!

There was a long wait to play our second game, late in the afternoon against City of York. It started with a tense five minutes until Sophie Hamilton opened the scoring with a well taken goal. Then two goals followed in the space of two minutes by Imogen Hurst. The first being the goal of the day, with a deadly pass from the back by Olivia Hamilton, deflected past the keeper into the roof of the net. This made the score 3-0 at half time. In the second half, two well worked penalty corners from Francesca Small and Sophie Hamilton and a field goal from Lizzie White saw us win comfortably. That said, there was some defending to do and with some excellent tracking back by Ursula Olsen-Groome and a barrage of penalty corners thwarted, Katie Mallet kept a clean sheet. This was important as goal difference in a tight pool was always going to play its part.

The team went out for supper with six points from their first two games, sitting on top of their group.

The team went into day two with two tough games to come against East Grinstead and Beeston. The East Grinstead match was first up and proved to be a tight affair with some very good indoor hockey from both sides. In the first half, Team Bath Buccs created many chances with Katie Jones and Emily Wastell going close. At times the East Grinstead goalkeeper did a great job. The deadlock was broken by a well taken penalty corner from East Grinstead in the eighth-minute putting them ahead. The game went down to the wire with much good play from Molly Hunter on the right boards creating openings for some exquisite passing from Olivia Hamilton. In the final minute, some fine link play between Katie Jones and Sophie Hamilton eventually got the better of the keeper and a point was secured with 1-1 draw. The other games in the pool had helped us, as we went into the last game knowing that we would qualify for a semi-final win or lose.

The Beeston match proved to be a game of two halves. In the first half, Team Bath Buccs completely dominated, creating many chances and playing excellent indoor hockey. Sophie Hamilton broke the deadlock with a well-executed penalty corner. At half time the game was under control, but the game took a turn in the second half. A mistake at the back led to a green card and a penalty stroke for Beeston. During the next two minutes, whilst we were down to 4 players, Beeston scored two goals. They also managed to score two more goals until we got our composure back. This meant that we ended up as runners up in Pool A and were drawn against Repton in the semi-final.

It must be said at this point, that getting out of the group puts you as one of the top four teams in the country, which is an unbelievable achievement for a group of players who only came together at the start of the season.

The semi-final proved to be the match of the tournament. Repton came out at a quick pace and did not let us settle into our game. The top scorer of the tournament proved a bit of a handful for us and some interesting umpiring meant that we were 2-0 down after six minutes. In the seventh minute Team Bath Buccs were awarded a penalty flick, which Olivia Hamilton stepped up to convert. Repton hit back with a converted penalty corner. This did not phase the girls who promptly, with some slick passing and a great assist from Katie Jones, gave Imogen Hurst a tap in at the far post. At 3-2 the match was still very much in the balance with both teams playing well. Unfortunately, Repton scored a penalty corner right on half time to leave the score at 4-2. The second half saw Team Bath Buccs dig deep and outplay Repton, creating chances and eventually converting a penalty corner with Anna von Keller scoring a well taken deflection. At 4-3 the match was hotting up. A well taken field goal equaliser from Sophie Hamilton created a great atmosphere in the hall. At 4-4 going into the final two minutes it looked like we were heading for penalty flicks. Then Team Bath Buccs gained a penalty corner which was coolly converted with a great flick by Olivia Hamilton. At 5-4 the unbelievable was on the cards. Unfortunately, in the final minute an intercepted pass was a cruel blow for Team Bath Buccs which allowed Repton to get out of jail and equalise. It was penalty flicks to decide the winner. Without going into too much detail, the first barrage of flicks was like the game. We scored, they scored. They saved we saved. The game had gone down to the last two flicks. An outstanding save of a good flick by the Repton keeper gave their top scorer a chance to win the game, which she duly did.

It was cruel way to lose but the Team Bath Buccs girls can be very proud of their performance in the semi-final against Repton, who went on to win the Title.

I cannot explain in words how proud I am of this group of players. They played all weekend without a coach present and put up with my poor banter and clichés. Individually they all bring something to the hockey table; they are tight knit group who get on well together. There has certainly been some laughter throughout the weekend, especially in the freezer isle in Tesco’s. You certainly could hear them coming with their chatter!

Finally, I would like to thank the parents for their support this weekend. It has been invaluable in terms of creating the right atmosphere for these girls to play their best hockey.

We regroup for our next outdoor England Hockey Cup Plate match v Taunton Vale on the 4th February.  Lee valley here we come! 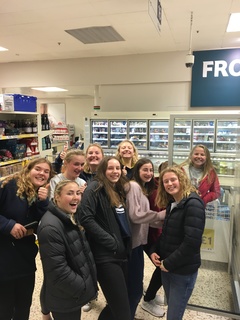