17 players from TBB U14 Boys headed to the National U14 Boys Championships at the Olympic Hockey Park at Lee Valley in East London on Saturday 14 May to battle it out with 7 other teams to be English Club Champion.

Drawn alongside Surbiton (winners in 2013), Beeston (reigning champions) and Bishops Stortford they had their work cut out. Despite a strong start against Surbiton, 2 soft goals in the first half saw them lose 0-2.  A strong performance against Beeston resulted in a 1-1 draw followed by a resounding 2-0 win over Bishops Stortford in the final group match to see runners up in their group.

The 3rd vs 4th play-off was held on the main Olympic pitch against Marden Russets. Captain Will Prentice led the team onto the pitch to the clammer of the crowd and pounding music; the atmosphere was electric. A very strong start by Buccs had Marden fighting furiously to keep the ball out the net but unfortunatley the tide began to turn as Marden put away their first goal and gained in confidence with Buccs eventually losing 0-3. Nonetheless, they can hold their heads high for finishing 4th in England and winning the Avon Cup against Cheltenham (who incidentally won the Nationals). 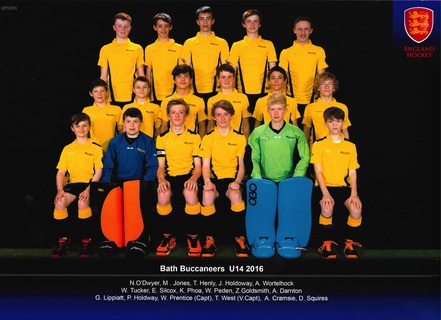