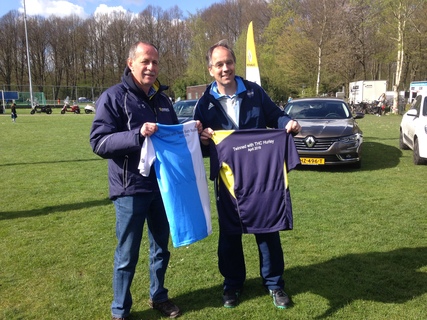 On the weekend of 16/17 April 2016, Chairman Nick Kendall, Director of Hockey Heber Ackland and Assistant M1 Coach Jon Williams visited Tennis and Hockey Club Hurley in Amsterdam to shake hands on the twinning of the two Clubs.  As far as we know, this is the first time this has been done in an official way.

The trip was facilitated by former M1 player and L1 Coach, Andrew Eversden and the team were welcomed by Huub Arendse (Hurley Chairman), Simon Organ (M1 Head Coach) and Renze Zwerver (M1 Manager).  The Buccaneers delegation were lucky enough to witness some top class hockey while they were there. Including the Hurley M1 play top of the table Amsterdam, and Bloemendahl Ladies play an Amsterdam team containing 6 Dutch internationals; the quality of these matches was exceptional. Probably the highlight though was witnessing over 1000 juniors play from dawn to dusk throughout Saturday.

The aim of the twinning is to develop links between the two Clubs covering Mens, Ladies and Junior hockey, training camps and festivals, coaching and sharing ideas.  In particular, TBBHC is looking to promote opportunities for Dutch players to come to the University of Bath to study and play hockey.  We also hope there may be gap year opportunities in the other direction.  So plenty of interesting things to pursue and a great way to see how they do things in Holland and make new hockey friends in the great city of Amsterdam!